Fish weight formula Copyright 2016 by Jim Rizzuto. All rights reserved except the right to link your site to this page.

Do not use the popular fish weight formula without reading this article first.  Nearly every week of the year some fisherman writes me with an issue involving the “fish-weight formula.”  It is almost always a misuse of the formula based on a misunderstanding of what the formula does and does not do.  Remember this: the formula was never intended to give the actual weight of an actual fish.

We are going to be very brave and ask you to be brave, too.  We are going to show you where the fish weight formula comes from so that you can see why it doesn’t do what you think it does.

It is a mathematical formula so, of course, we need to discuss mathematics.  I promise that you won’t be asked any questions and will not be required to do the hard stuff.  You just have to watch as I do the work for you.

To make sure we are on the same page, the fish weight formula is the length times the square of the girth divided by 800.  The length in question is the “short length,” meaning the distance from the tip of the lower jaw to the fork of the tail.  No bill, no tail fins included.  The girth is the distance around the fattest part of the fish.  Fins are closed so they don’t count in the girth.

The first thing to understand is that the formula does not  actually work with the volume and density of the fish you are trying to “weigh.”  Instead, the formula comes from a geometric model chosen because it gives a simple formula and produces results that compare favorably with the real fish.

I call this model the “wedge fish,” because it looks like two wedges stuck together.  I have made the wedges out of cardboard so you can see the “wedge fish” in three dimensions.  In the first image, I am showing the wedges open so you can see that the face where they come together is a square.  We are using a square because it is the friendliest shape for the development of the formula

We have marked the edges of the square with the notation g/4 with g being the girth of the square.   Because it is a square each side is 1/4th of the girth.  We’ll use that in a minute after another image.

Here we have stuck the two wedges together so you are beginning to see it as a highly stylized fish of sorts.  That’s exactly what the fishermen who developed this formula in the 1940s intended.

For the last image, we are putting a top on the fish so we can mark the length of the head wedge, the tail wedge and the overall “wedge fish.”

When you use the formula, you are actually getting the weight of a fish that looks like this and not like the one you caught.

The next image shows my classroom instructional board with all of the steps needed to develop the formula.  In order to keep from driving the type-setter crazy, I am showing the discussion in an image of the handwriting on the board I use in my mathematics classes.

Refer to the image as I take you through the steps.

Starting at line 1, we are finding the area of the square cross-section of the fat end of the wedge.  We are using the girth of the fish as though it were a square.  Each side of the square is 1/4th of the girth.  The area would be the side squared.  Squaring a fourth of the girth gives us the girth squared over 16 (which is 4 squared). 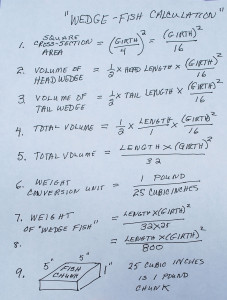 Line 2 gives us the volume of the head wedge.  It is half the head length times the area of the square cross section.  This is a standard formula from geometry and you can probably see where it comes from when you figure the wedge is actually half of a rectangular box.  If not, just rely on the guy who derived the formula.

Line 3 gives the volume of the tail wedge.  It is half the tail length times the area of the square cross section.

In Line 4, we have combined the volumes of the two wedges to get a total volume.  We’ve used a simple rule from elementary algebra (the “Distributive Property”), but if that is not familiar to you, locate some 9th graders and have them explain it.

in Line 5, you can see that we are almost there, except that the number on the bottom (the denominator) is 32, not 800.  That’s because we now have the volume in cubic inches and not the weight in pounds.

In Lines 7 and 8, we have multiplied the volume in cubic inches times the fraction shown in Line 6 and we now have the formula that started off the discussion.  In other words, we have the weight of the stylized “wedge fish” we have subsituted for the original.

Before leaving the board, look at the diagram in line 9.  We are showing it as a guide to how you can verify (or dispute) the statement that a pound of fish is 25 cubic inches.  Take a filet of, say, marlin, and slice it so it is an inch thick.  Now slice that filet into a 5 by 5 square to get a 25 cubic inch piece.  Weigh it.  You will see that the weight varies a bit from fish to fish and from where you might have cut the piece on the fish you are using. But 25 cubic inches to the pound is pretty close.

For big marlin, a pound is slightly less than 25 cubic inches — a little bit over 23.  If you use 23.4 in the formula instead of 25, your denominator is just about 750.  Some marlin fishermen in Hawaii prefer a denominator of 750 rather than 800 and feel it gives a number closer to the actual weight of the actual marlin.

Now, let’s use the “800” formula with the dimensions of a fish of known weight. For example, the fish that Carol Hinkle-Herren 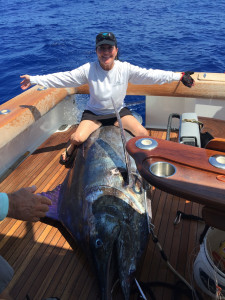 is sitting on in this picture.

The “short length” (no bill and no tail) was 134 inches and the girth was 73 inches.  If we used those dimensions on the corresponding “wedge fish,” we get 893 for the wedge fish model.  Carol’s fish weighed 880 pounds for a difference of 13 pounds.  That is not a “13-pound error”: it is the difference between the weight of the fish and the artificial weight of a model of a different shape. The error would be to say “We didn’t weigh it but the formula said it weighed 893 pounds.”  No such thing. The formula never really said anything about this fish.  (The “750” formula gives a number that is wildly different.  Try it yourself.)

But here is an even better example of the problems you find if you don’t realize the difference between what you are doing and what you think you are doing.

A few years ago, a Kona fisherman weighed a 1,058-pound marlin with a length of 131 and a girth of 75.  If you apply those numbers to the “wedge-fish” formula, you get 921 for the model — a difference of 13% between the model and the actual fish.  That’s the biggest difference we have been able to come up with but it shows you how careful you must be in interpreting the results.  If, for example, a 1,000-pound marlin can differ from the wedge model by plus or minus 13%, the formula could give you a result ranging from 870 pounds to 1,130 pounds.

So remember that the formula, itself, gives a number that is not the actual weight of your fish.  The differences compound if you use inappropriate dimensions (bill and tail length rather than jaw to fork length).  So your expectations can be way off from reality.

Like many veteran Kona fisherman, Chip has a rule about granders.  “Don’t say it if you don’t weigh it.”  And the dimensions are not really another way of weighing a fish.