Even if you could predict the weather, you can’t predict the fishing.  We are into the second year of a major 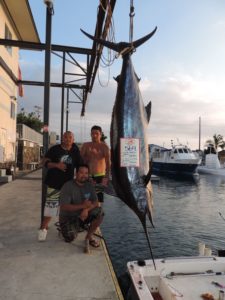 El Nino warming event and yet the offshore fishing of 2015 is markedly different from 2016.  Last year, 2015, was one of Hawaii’s best ever for big fish with at least seven granders caught here.  This year, 2016, has turned up no granders so far, but we’ve seen steady fishing throughout the year for mid-size blue marlin even up until last week.

Many local fishermen think of the roi (bluespotted grouper) as an undesirable thug.  An alien species introduced here in the mid-1950s, the roi is now the dominant reef predator.  It preys on the prized reef fish that were already established here when Hawaiians first discovered the islands thousands of years before.

Along with ta`ape (blue-lined snapper) and to`au (black-tailed snapper), roi were intentionally brought here by Hawaii’s natural resource officials to fill a perceived gap in reef species. All three flourished at the expense of native species.  A 2007 study reported that the biomass of roi is greater than all other reef fish combined.  UH scientists estimated that the roi population on a three-square mile reef section of the Kona Coast can eat over 8 million fish of many kinds in a year’s time even though individual roi rarely grow to more than 20 inches.