And the heat goes on.  Sea temperatures remain near mid-summer highs, which may explain why some Kona fishermen are seeing July/August action in September and October.  On Tuesday, Capt. Neal Isaacs weighed a 573-pound blue marlin as his sea-temp gauge read a balmy 82 degrees.  That same day, Capt. Marlin Parker on Marlin 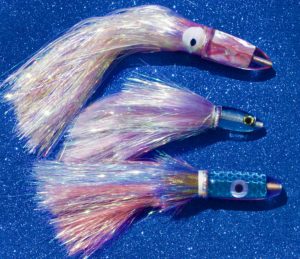 Neal’s 573-pound blue marlin hit just as Anxious was getting ready to pull in lines outside the harbor and “surrender” for the morning.   Add “mercy bite” to your glossary of fishing terms.  For another example, note that Paul Dolinoy was doing a Friday birthday run on his boat Sapo with Capt. Chris Choy.  He was hoping for a blue marlin, but the fish gods seemed determined to ignore his birthday wish right to the very end.  At 3:00 pm, a 100-pound blue hit to add a little joy to the day.  This one turned out to be a “mercy bite” of the second order.  Chris and Paul were able to release it to ensure many more Happy Birthdays.

On Anxious, as well as many other successful boats, the lure for the season seems to be a big blue bullet head with a pink and silver “flashaboo” skirt.  That’s the trade name for a shiny, filamentous material that billows out behind the lure to give the lure the full look of a healthy baitfish.

“Ninety percent of our bites have been on the flashaboo bullet,” Neal said. “The secret is in the shine.”

Beasts of the week (marlin weighing 500 pounds or more, including releases).