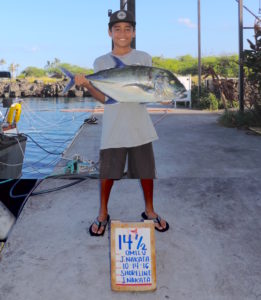 more).  These larger, hard-fighting jacks are now delighting shore fishermen like John Nakata who brought a 14.5-pounder to the Fuel Dock scales to be weighed.

Bluefin trevally go by the Hawaiian name “omilu” (oh-Me-loo), which, in itself is a puzzle.  The Hawaiian word also means “insignificant.”  Believe me, this tough gamefish is anything but insignificant. Ask a shorecaster to list his favorite gamefish, he would put omilu second, behind only the giant trevally, or third behind the GT and the o`io (bonefish).  Depending on when you asked me my favorites, I would put it at the top — especially if I was trying to pull one in at the time you asked.

On Kona Blue, Capt. David Crawford and crew Chris Hudson hosted a visiting Korean military man and hooked him up to one of the biggest fish caught here last week.  The visitor was introduced only as “General Woo” when he arrived at the boat’s slip in Honokohau Harbor with two officials in tow for a four-hour charter.

The battle kicked off at around 10:00 am when the aggressive blue marlin attacked a lure punching through the white water commotion churned up in the wake of the 53-foot Hatteras battlewagon.  As Capt. Dave worked a hot spot on the 1,000-fathom edge a mile or so off Kaiwi Point, the marlin grabbed an Aloha Lures Deep Six  and took off on a blistering run.

“The marlin screamed out a lot of line as it headed straight away from us,” Capt Dave said.  “It took the top shot and was well down into the Dacron backing before it slowed down.  That’s at least 500 yards of line.”

And the “beasts” go on.  Hawaii’s big-game fishermen catch big marlin around the calendar throughout the year.  Whether the sea temps are up to a “hot” 84 degrees in mid-summer or all the way down to a “chilly” 75 degrees in the winter, blue marlin enjoy cruising comfortable island currents looking for companions and commestibles.  (Yes, they come here to eat and mate.)

So it’s mid-October.  No matter.  On Friday, Lepika hit the beast list with a 550-pound blue marlin.

Beasts of the week (marlin weighing 500 pounds or more, including releases).