With Halloween just ahead, the fish are in trick-or-treat mode.  These days, you have to be especially tricky to get a treat and your treat is likely to be a surprise in disguise. 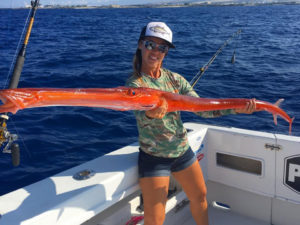 On Blue Hawaii, Capt. James Dean and crew Scott “Scooter” Fuller were hosting their boss, Mike Jacobson, and were surprised by a pack of unknown billfish.  They saw their first one jump and thought it might be a small blue marlin or stripe. They got it to the boat as more billfish were playing tricks with their other lures.  A second fish hooked-up and raced off just as Scooter pulled the first one alongside. It threw off its cape-like disguise and opened up a huge sail along its back.  James realized he was looking at the first sailfish he has caught here in 30 years.

James’ second Kona sailfish of all time followed a few minutes later.  The trio kept one as a trophy and released the other.  These were Mike’s second and third sails here and the fifth and sixth for Scooter.

Islanders here and elsewhere say the timid-looking trumpetfish preys on the ferocious moray eel.  That is not quite as crazy as it sounds if you know the cornetfish has a long, bony snout with razor-edge ridges.   Lest you think I am making this up, I am giving you an account by marine biologist R. E. Johannes from the book “Words of the Lagoon.”

Earlier in this column, you read about an overnight trip on Anxious with Capts. Bryan Schumaker and Shawn Palmer.  In addition to their two striped bonito, they tagged a blue on the way to their overnight spot, caught a shark (released) overnight and then tagged a 200-pound blue on the way back to port.

Overnighters are not on Capt. Neal Isaacs’ schedule these days but he was happy to resume the helm on Friday and pick up where the action left off.  While Neal, Brian and David trolled south from Pebble Beach to Milolii and back, they boated two ono and a mahimahi and hooked a blue estimated at 650 pounds or more.  Though it was the biggest fish of last week, they got it to the boat in about 15 minutes with a lot of determined boat action.  Getting a fish to the release point rapidly spares the fish and the angler, with both in better, happier shape afterwards.