A Kona fishing tournament is never over until the last hook is pulled from the water.  What’s more, tournaments here are usually decided as much by the fish missed as the fish 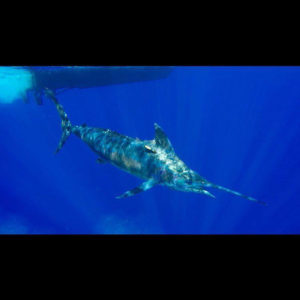 caught and even by the “count back” time the fish was caught.  So it was for last week’s 26th Tag and Release Tournament (TART 26).  Capt. Kevin Nakamaru’s team on Northern Lights 2 won the five-day event only after what the veteran skipper called a “heartburn afternoon” on the final day.

In 2015, the Big Island stunned the blue marlin world with five granders (marlin of 1,000 pounds or more).  So far, no Kona grander this year.  What a difference a year makes.

In the Azores on Saturday, the boat Xacara boated a 1,042-pound blue marlin to score the world’s fifth blue marlin grander.

On Friday, the charterboat Ahi Lani hooked a 110-pound ahi in what seems like an unlikely place.  Cyrus Widhalm says the fish hit an ono lure as Ahi Lani was turning out of ono lane.  Being world travlers, ahi are usually found well offshore — even far offshore.  Ono lane is just outside the surfline in waters from 30 to 40 fathoms.

WAR ZONE VIDEOS OF THE WEEK

It’s a war offshore, and I am not talking about the intense competition between tournament teams.  You will understand by watching two videos online.

The Kona Iki Trollers Light Tackle Tournament is set for August 27. For the rest of the story