During the Hawaiian International Billfish Tournament (HIBT) last week, I was on the pier every afternoon holding a microphone.  My job was to explain the strangest tournament in history to the assembled throng of puzzled specators in the grandstand. 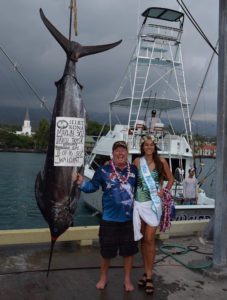 What made it so strange?  It began with a gutsy first-day gamble and ended with the high drama of the last catch of the week.  It went through lots of twists along the way, so let me count the oddities.

On Day One, David Trask of Australia’s Redcliffe Penninsula Game Fishing Club brought in a marlin with a dilemma — should they weigh it or release it?  If it weighed more than 300 pounds, they would get some valuable extra points by bringing it in to weigh.  If it weighed less,  they would only get points if they tagged and released it. Tournament scoring rewards the release of fish under 300 pounds and the weighing of fish over 300.

This one looked right on the line so the safest strategy was to go for the certain 300 points and release it.  Instead, they gambled and pulled the fish aboard.  Photos went out immediately on Facebook. Naysayers popped up everywhere.  The decision looked even worse when they measured the length from the tip of the lower jaw to the fork of the tail (the “short” length) and got less than the 99 inches fishermen use as a guidline for 300 pounds.

For the rest of the story.

Kayaks are the smallest, most fragile and least stable craft of the “offshore fleet,” but kayak fishermen seem to have few limits. In this weekly column you have read about amazing kayak catches of marlin, sailfish, spearfish, yellowfin tuna, ono, mahimahi, ulua, and amberjack.  Just when I think I have heard it all, along comes Josh Fulton with a 50.5-pound albacore.

What’s so difficult about catching an albacore? They migrate through Hawaii waters at great depth, down in the cool mid-60s water.  They are seldom, if ever, caught here near the surface during the daytime.

With the HIBT now history, Kona’s packed summer tournament schedule continues with the  Kona Shootout of the Hawaiian Billfish Series.  Three days of fishing kick off today, and the event ends with an awards gala on Wednesday evening.  As the teams fish for monetary prizes, they are also eligible to win merchandise from daily raffles conducted throughout the fishing day and at the awards banquet.