What’s the difference between a “lure” and a “bait”?  Well, a lure is an artificial bait and a bait is a natural lure.  But you can lure a fish with a bait and bait a fish with a lure.  Confused?  So were the fish in the recent Lure-Maker’s Challenge Tournament.  The winning team used a live bait to catch the biggest fish of the competition.  Team Rod Bender’s 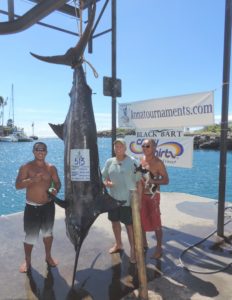 513-pound blue marlin was lured to the hook by a very lively skipjack tuna bait.

Of the 15 participating boats, 10 were sponsored by lure makers.  So the lure-makers division operated separately from the main event under whatever arrangement each team reached with its sponsor.  Kerwin Masunaga of team Rod Bender makes his own, very successful, line of lures, but he switched to a live bait when circumstances dictated and it paid off with a catch worth $76,419.  Rod Bender also tagged a blue on a Masanaga lure for an additional 200 points, which were not needed in their win.

AS DARBY BORE DOWN ON KONA

Fish get just as wet on a sunny day as they do when it is raining so they aren’t afraid of storms.  Darby offerred another example.  As the tropical storm targetted the Big Island on Saturday it left a morning window of opportunity for a few Kona boats eager for one more shot before the weather shut down the fishing.  With a watchful eye on the weather, Capt. Chip Van Mols found sunny skies and three blue marlin (all released) within a safe run from Honokohau.

WHEN THE OUTRIGGER TIPS TAP THE WAVE TOPS

Years ago, Capt. Kent Mongreig heard that the best time to fish the Kona Grounds off Keahole Point was when sea conditions were roughest.  Capt. Freddy Rice once told him that the bite was best when the boat rolled way past the comfort zone.  If the outrigger tips tap the wave tops from one side to the other on either side of the trough, get ready for the reels to go off.

The weekly tag report is full of hopeful long shots.  Return data for tagged marlin tell the tale.  The reality is that most of our local fleet has never had a tagged fish recaptured or recovered a tag.  The chances of a tag recovery are between 1 in 100 and 1 in 1,000, which makes the odds against a very special tag recovery from last week astronomical.  Indeed, what happened may never have been done before.

Black marlin know the difference between artificial lures and live bait.  Kona fishermen take the majority of blacks here on live baits.  That proved true again last Monday when Capt. Russ Nitta hooked the biggest black caught here this year.  Estimated at 400 pounds, the big black jumped on a live aku. Angler Edward Ngyuen fought the fish to the boat Lepika.  Russ was able to release it unharmed to return to whacking the aku schools.